Greedy Flower is a comic drawn and written by Alyah (Alessandra Patanè). It is published in Italy by Shockdom and includes seven volumes currently in progress.

WHAT’S GREEDY FLOWER ALL ABOUT? 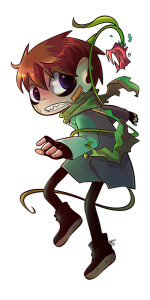 This is the story of Keo, a mysterious little zombie serving Kurobo, the master of Robos, evil entities originated by humans’ despair and hatred. In this story, the world is already projected in a total decline and these creatures, born from men’s cruelty, live to swallow people’s souls and memories, and to preserve over time their empty bodies. Keo is involuntarily forced to kill the few remaining humans, by using “flower monsters” which he constantly brings with him.He doesn’t know why but, as he is only a child, he sees everything as a game and he doesn’t realize the weight of the atrocities he is committing. He is unable to distinguish right from wrong. During his trip he will meet Moo. She is a quite dizzy and very energetic girl, who is looking for her parents and is immune to Keo’s attacks. Her travel companion is Bastet, a mysterious black cat which seems to know a lot.

Keo will be forced to take Moo with him. Their journey will then be interrupted by Jeko, an irascible and megalomaniac mini-zombie as Keo. Jeko, not like Keo, rebelled against Kurobo. He wants to surpass his strength, and to dominate the world. Jeko seems to be strongly related to Moo and Keo, even though, at the beginning of the story, it is hard to understand why… The three protagonists, despite their different stories, will discover they have the same goal: finding out more about their own past, and fighting against Kurobo’s henchmen. They will discover the truth about their own nature.

Who were these children in the past? How did Keo and Jeko die? What do the Robos really want from them?